The chair of the UK Statistics Authority, David Norgrove, sent a letter yesterday to UK Foreign Secretary Boris Johnson alleging that Johnson had engaged “a clear misuse of official statistics” (here in PDF). In an article in the Telegraph laying out his vision for Brexit, Johnson claimed, “Once we have settled our accounts, we will take back control of roughly £350m per week.”

The claim of “£350m per week” was central to the Vote Leave campaign and has been judged to have been a “potentially misleading” claim by the UK Statistics Authority (here in PDF). There are some interesting science policy questions raised by the practice of having a government statistics agency empowered to issue a rebuke of a government minister. Let’s take a look at this issue in a bit more depth. 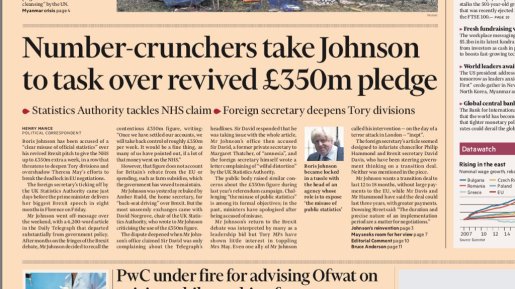 Let’s first take a look at the authority of the UK Statistics Authority to issue rebukes. The Code of Practice for Official Statistics gives the agency wide latitude in issuing rebukes, corrections, clarifications and so on. The Code states that it seeks to:

Promote a culture within which statistical experts in government can comment publicly on statistical issues, including the misuse of official statistics.

The EU in its European Statistics Code of Practice (at 1.7 here in PDF) also gives broad license to statistical agencies to comment on the use of statistics by politicians:

The National Statistical Institute and Eurostat and, where appropriate, other statistical authorities, comment publicly on statistical issues, including criticisms and misuses of statistics as far as considered.
suitable.

With such freedom comes questions of accountability. Such as:

I have looked and can find no good answers to these questions. The UK Statistics Authority maintains an admirable listing of all of its correspondence (dating to 2009) which totals 739 letters and statements. There are a number of rebukes to be found here, spanning governments. However, nowhere can I find answers to my questions. (Please do let me know if you are aware of answers that I have missed.)

The general problem here is an age old on — if the statisticians are the watchers, who then watches the watchers?

The risk for the UK Statistics Authority is that it wields its power (or is perceived to wield its power) to rebuke selectively or even politically, which would compromise the very purpose for which such rebukes exist in the first place — to provide greater trust in the legitimacy of official statistics. Of course, there is no basis to suspect any shenanigans going on in the power to rebuke, but it is a clear point of significant risk to the UK Statistics Authority.

It is an unnecessary risk as well. To be continued . . .